Even in a year where so many good games came out, there will always be a fair share of games that didn’t “click”. Maybe they had a new idea that needed to be refined. Maybe there was a lack of polish or it didn’t stand out from its peers. For whatever reason, the games on this list left me wanting.

As a friendly reminder, this does not mean that the games here are bad. You might even like them. What this does mean is that I personally had some issues with it that hampered my enjoyment enough to notice. Without further ado, my disappointments of 2017 are:

Another year has gone by, and another year’s worth of games have been released. Though the world seems to burning down around us in the year 2017, there is no denying that this has been one of the best years in gaming for a long time. So many high quality games of varying budgets and prices have been released that even the most obsessive gamers (like me) had a hard time keeping up. It seemed like every week there was something new and exciting to play.

As always, I present these games in an order decided by a random number generator. All of them are games I have personally enjoyed and could easily recommend. Just because a game is not on this list does not mean it’s bad. Rather, I either didn’t have much to add or didn’t play it. Without further ado, my highlights of 2017 are:
Read more »
Posted by newdarkcloud No comments: Links to this post

Email ThisBlogThis!Share to TwitterShare to FacebookShare to Pinterest
Labels: 2017, Game of the Year, Game of the Year Awards, Highlights, Never A Better Time To Play Video Games, Press Start to Discuss

#111: Hidden Agenda and the Creativity of Limitation 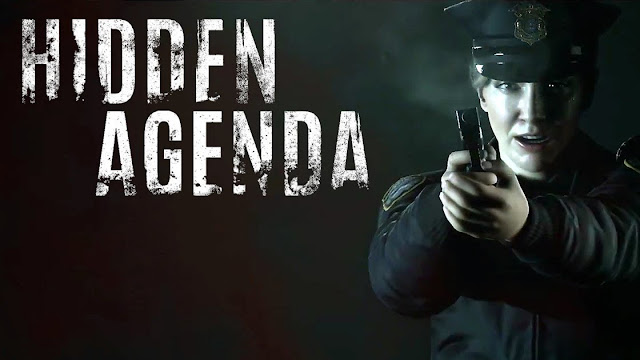 Recently, I have been hearing people in my gaming news feed, like Patrick Klepek at Waypoint, talk about a game called Hidden Agenda. It isn't the first time the game fell onto my radar, coming up briefly in some of the presentations at E3 2017. As someone who has been casually looking out for news on it, I was surprised that it had been released without so much as a peep.
Hidden Agenda is the product of Supermassive Games, the same studio that brought us the surprise smash Halloween hit Until Dawn in 2015. Rather than continue Until Dawn's loving homage to horror movies with another, similar game, Hidden Agenda applies that same sense of genre-awareness to the modern crime-drama. Taking the roles of ace detective Becky Marney and hard-hitting prosecutor Felicity Graves, players attempt to solve the case of the Trapper Killer, who booby-traps their victims’ bodies in order to kill responding officers.

At least, we have completed the primer series. We're done.

And that's that. Sam and I stand by what we said at the end this. Despite the many trials and tribulations to get this series to you guys, we are glad to have done it and hope it was as fun to watch as it was for us to record.

However, I think it's also worth going over some of the lessons we learned doing this series, so that the audience, should they choose to follow in our example and do long form video let's plays on games, can learn from our mistakes.


And give credit where credit is due. As the person who writes these articles, I have more "presence" than Sam does, but he's been the one diligently editing all of these videos together for your entertainment. A more even distribution of the workload, whenever we return from our long-deserved break, is a crucial element we'll need to work on going forward. I'm not as good an editor as Sam is, but I can do it myself (as seen in my Hitman LP) and it's not fair to him to have to do all of that.

Speaking of new video content, it may be quite some time before we get back into the swing of things. This was a tough project, and both Sam and I have jobs now. As a result, we need to have some serious talks before we can even think of continuing. Odds are we'll be back eventually, and I've been thinking about getting more heavily into writing again, but for now Interactive Friction will go silent.

Farewell for now, and I hope to see you all soon. Kingdom Hearts has been quite the ride.


Posted by newdarkcloud No comments: Links to this post

Almost done. After this, just one more episode until we've completed the Kingdom Hearts Primer.

Let's begin my first establishing the timeline, as we know it:


Take another look at that last part, he planned so far ahead (presumably with future sight) that he had already prepared for everything to fall apart. He even built preparation for future contingencies into his contingencies.

Let's not forget that the significance of the X in each Organization members' names is also explained, along with the gold eyes and pointy ears. If I Nomura hadn't already revealed in an interview that he deliberately leaves elements of each plot vague so that he can fill in details at a later date, I might be impressed this level of forethought. As it stands, just thinking about how likely any one of these events is, let alone all of them occurring in this exact sequence, is mind-shattering.

This is the point where even fans of the franchise question the credulity of the story. Fortunately for Nomura, Kingdom Hearts love the series so much that we (Yes, I still count myself in this group) are still willing to put up with pretty mediocre writing so we can hang out with our "old friends": Sora, Riku, and Kairi.
Posted by newdarkcloud No comments: Links to this post

If you thought that Birth By Sleep did a terrible job with how it linked the stories of games that chronologically (by release date) came out before it, then wait until you see what they did in Dream Drop Distance. There's no other way to explain how what is about to unfold other then Xehanort being literally clairvoyant, or having a copy of Nomura's notes.

But we'll get more into that in the next episode. For now, the most interesting thing to note is, as we'll note in the next episode, Riku is the true protagonist of this game. Sora is actually the victim of a sinister plot that has been unfolding over the course of the whole game. Despite our constant complaining, the game does a good job foreshadowing that something bad is going on by continuously bringing Sora into contact with Xemnas and Young Xehanort.

Buckle up, we haven't even begun to jump down the rabbit hole.
Posted by newdarkcloud No comments: Links to this post

A land of musical, magical wonders... trapped by Kingdom Hearts.

Again, credit to Square Enix for being bold enough to tackle this kind of source material. That said, I don't have much to add here that I didn't say in the recording.
Posted by newdarkcloud No comments: Links to this post

"So that's where this episode came from," Brandon said to himself.

(Before you correct him, I have told Sam that there were actually four musketeers in the original novel. Don't worry about it.)

Though we groaned a lot during this episode, I think it is really cool that Nomura tied a lot of the older Disney movies into established Kingdom Hearts canon. Without calling attention to it, they also explain King Mickey's backstory, even if they use time travel in a dream to do it.

The plot device of the sleeping worlds, despite how silly it is, actually gave the writers an excellent excuse to work with previous Disney films. I appreciate the originality.
Posted by newdarkcloud No comments: Links to this post