As many of you may know, every Saturday night I play Commander with a few of my friends on Cockatrice. Normally, I take to Twitter to go through the decks I played with and won with, talking about some of the combos and big plays I performed.

However, this week is a bit different. Instead of our own decks, we played with the recently releases decklists for the pre-constructed Commander 2019 decks. Normally, we get in several games on Commander in a night, but this night only had time for a single game, since the one match we played lasted 3.5 hours.

With this in mind, I'll be going over my thoughts on each of the decks, and what big plays each of them performed. Further, the thread will be posted here as a blog post, rather than a tweet thread. I might just do that for future posts as well, but I'm undecided as of now. 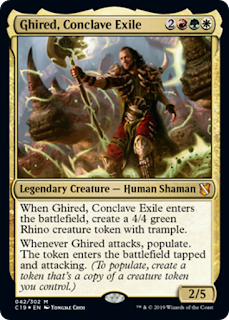 The deck that actually won was the Naya Populate deck, with Ghired, Conclave Exile as the Commander. I was genuinely impressed by the deck's overall performance and resiliency. Almost every single time after a big board clear was played, the deck was back up and running immediately afterward, generating tokens and reestablishing the board.

The player piloting the deck was able to get Garruk, Primal Hunter out early, and the token generation combined with the card draw kept him in steady supply. In addition, the size of his board made it nearly impossible to attack into Garruk, so he was able to pull off the -3 twice and rapidly accelerate his draw.

There was also a period where we were in deep trouble due to the embalmed Angel of Sanctions. As it kept populating, it exiled so many key pieces from the rest of our boards that we were having difficulty staying in it. Ghired's Belligerence where X=10 also did an excellent job of keeping us down while keeping him in a steady supple of tokens.

Though a different player finally finished off two of us (in a group of 4), he was in such a strong position for most of the game that he stayed the Archenemy for the rest of us. And despite that, he managed to stay on top and win. 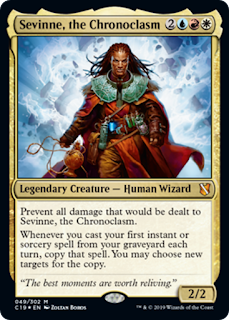 The deck I ran was the Jeskai Flashback deck, helmed by Sevinne, the Chronoclasm. While the deck has some solid plays, I was mostly disappointed in its performance. Sevinne seems like he would be a solid Commander in the right deck, but despite being themed around Flashback, he didn't have the kind of support that I feel like he should have for his second ability. As a creature though, he's a solid blocker, able to keep even the strongest creatures from scratching his controller.

The most recurring synergy that I took advantage of was Oona's Grace. With it's retrace ability, I was able to spend 2U to transform a land into an extra two cards thanks to Sevinne's ability to copy it. Sadly, that was the most profound card draw I was able to get in the game we played, but it was enough to help me keep up with the others.

My other big accomplishment was keeping the table's big Naya-colored Archenemy off their draw enchantments like Elemental Bond, and their token generators like Song of the Worldsoul, using my removal pieces like Ray of Distortion, which also got copied by Sevinne. I was also able to use Refuse // Cooperate to copy the Madness deck's In Garruk's Wake to turn it into a full board wipe rather than a one-sided one for some laughs.

I briefly had moments with cards like Guttersnipe and Burning Vengeance, where I was setting up to deal tons of damage to the board, but I wasn't able to capitalize on them since they got destroyed before I could do so. There's a solid idea in this deck, but I think the execution leaves just a bit to be desired. 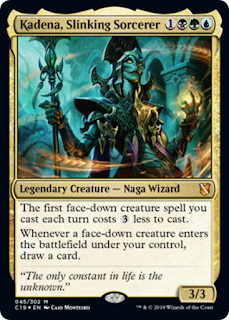 Kadena, Slinking Sorcerer's Sultai Morph deck was the deck I was most excited to see in action. Though I wasn't the pilot, I was pleased to see how well in performed and might build my own version of it at some point in the future. She's everything a morph deck could want, allowing her pilot to play one Morph spell for free each turn, and turning them into cantrips.

The most impressive aspect of the deck is the way it can interact with everyone one the board to throw wrenches into all of their plans. Between stealing the Populate player's Ohran Frostfang with a morphed Chromeshell Crab, using Thousand Winds to bounce all of the populated tokens and give all the other players the cards exiled with Angel of Sanctions, and casting Echoing Truth clearing all the Pegasus tokens my Jeskai flashback deck created with Storm Herd, it was responsible for controlling the game.

Sadly, we didn't get the chance to see it's splashier plays, but there's clearly a lot going on with the deck. I think it'll make waves in a different way than the Naya populate deck did. 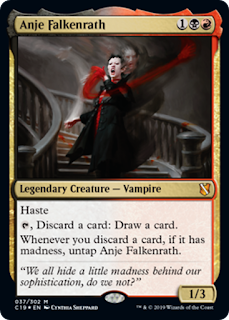 I'm not entirely sure what to make of the Madness deck, led by Anje Falkenrath. It spend a large portion of the game completely out of it, top-decking for what seemed like at least 5 to 10 turns. Nevertheless, it still had some impact. Its Bloodthirsty Blade allowed the pilot to force the populate deck to attack everyone else with pieces that could be destroyed on block.

But for the most part, almost every play from that deck didn't feel very effective or was easily soaked by the rest of us... until they discarded From Under the Floorboards and played it for X=14 with the Madness cost. Which might not have been that bad, if we hadn't forgotten that they had Warstorm Surge on the board. That was enough to knock me and the Morph player out of the game, but the Populated player just wouldn't relent and closed out the game since he had so much life from swinging with Wingmate Roc and an army of token.

Even with the one play, it's hard to say that the deck feels all that strong. Again, most of the time we just ignored it because it wasn't making too much of a splash on the board, and getting punished whenever it did.

This was my first time playing with Precons out of the box, and I had a good time even if I didn't make much of a splash. This was a good game, but not one I'm eager to relive due to the length of it.
Posted by newdarkcloud