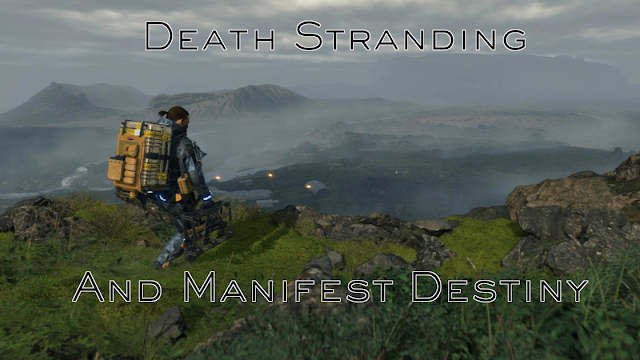 I'm sure by the time you're reading this, you've probably already gotten tired of the discourse surrounding Death Stranding. Such seems to be the story with most of the people I know, even ones who like it. And yet, as I was trekking along the snowy peaks surrounding Mountain Knot City, an insidious though began to creep into my mind, one that I couldn't shake even as I began to reach the end of the game.
Taking place in a post-apocalyptic America where the barriers between the human world and the afterlife are worn thin, Death Stranding has the player assume the role of Sam Porter Bridges, a courier working for Bridges, a subsidiary of the United Cities of America (UCA). His objective, set forth by Acting President Samantha America “Amelie” Strand, is to travel westward, starting from Capital Knot City in the east, to annex the various cities and shelters across the remnants of the old country in order to “make us whole”. As a student of United States history, this began to draw parallels to the real life doctrine of Manifest Destiny.

For those of you who are unfamiliar with the term, Manifest Destiny is the 19th century concept that the American people were special, and had a divine mandate to expand their territory, extolling the virtues of their own democratic civilization and way of thinking. Not only was this the moral duty of America, according to proponents, but it was natural and inevitable for the nation to recreate the world in their own, enlightened image. While this can be directly correlated to America's expansion from east-to-west in the 1800s, vestiges of the doctrine exist today in the form of American exceptionalism that national leaders use to justify conflicts in other regions of the world.

It doesn't take too much effort to see the immediate parallels. Like the settlers of the original thirteen colonies, Sam's quest is about bringing already populated locations into the American government, under the pretense that doing so is in the best interest of the residents. Early in the game, the people he encounters are all members of the previous task force sent out to do the same thing, but didn't have the equipment necessary to finish the job by connecting each location to the “chiral network,” this world's version of the super internet. Since they are already more-or-less part of the UCA government, the issue doesn't come up.
This starts to change as we reach the middle of the country. While members of the first group still certainly dot the map, most of the settlements are owned and maintained by doomsday-preppers and their descendants, who had shelters established prior to the apocalypse. Naturally, many of them have no desire to join up with the remnants of a fallen nation. As a courier, Sam has to take on and fulfill enough orders from them to convince them that it is worth giving America and its network a chance. On one hand, there is Death Stranding's overt, surface interpretation of what is going on here: That by assisting these preppers, the player is helping them overcome their fears and see the value in forming connections with other people.
But more subtly, there's the less obvious lesson being taught here, the one that needs to be fully dissected. By completing orders to transport valuable cargo to these locations, Sam is exposing them to the wonders of the UCA, and what “America” can both physically and metaphorically “deliver” to their own, pre-existing societies. Once they acquire a taste of this greatness, even if it takes multiple missions to do so, it's only the natural, logical conclusion that they would be better off if they allowed themselves to be annexed and assimilated into “America”. Even someone like The Elder, an old man who has become rightfully distrustful of nations since he witnessed a pre-apocalypse US where leaders “wanted to build a wall along the whole damn border”, will gladly give that same nation a second chance after experiencing what it can provide. It is almost as if becoming a part of the UCA, a part of America, is the inevitable, logical conclusion of all people Sam encounters on his quest.

As for whether or not America is blessed by God, we cannot broach this subject without delving into many of the late game spoilers for Death Stranding. After finished his westward exodus in Edge Knot City, “completing the chiral network” and “making America whole”, Sam learns that Amelie is actually an “extinction entity”. Her sole reason for being is to herald in the next mass extinction event, as the source of the current apocalypse. In layman's terms, she's powerful enough to destroy the world, and will eventually be compelled to do so whether she wants to or not.
Being the protagonist of the story, Sam eventually confronts her in the afterlife (it makes sense in context). Rather than attempt to fight or kill her, he convinces her that the people he has connected with deserve to have a chance to prepare for and survive the apocalypse by working together. Seeing “extinction as an opportunity” for mankind to better themselves, she relents and promises to buy mankind as much time as she can. It's a moment that reaffirms the idea that we are better when we unite as one... or does it?
After all, the “connections” Sam formed aren't just metaphorical, in the sense that he's growing closer to other people. They are very literal connections to the chiral network, by which the UCA exerts its influence across territories annexed under its banner. Under this context, Amelie, in all her vast power, the closest thing this world has to a literal God, is blessing Sam with more time for the very explicit purpose of continuing his efforts to acquire even more territory. One day, once the UCA has expanded far enough and acquired all the knowledge it can, it will be fully equipped to shield humanity from the inevitable apocalypse and shepherd it into a new age. Such is the divine mandate from Acting President Samantha America Strand.

Now, I want to clarify that I sincerely doubt Japanese game developers like Hideo Kojima and his team would have any idea what Manifest Destiny is, nor the context behind the themes I'm outlining. Let us not pretend that this interpretation was part of his intended vision. However, just because it wasn't the team's intent does not make it any less valid. We all have implicit and explicit biases that color the works we produce and what we take away from the art of others. And yet, I cannot help but see the similarities between the events in Death Stranding to what real world political thinkers truly believed, and grow weary at the thought. It is worth examining the fiction we consume so that we don't accidentally produce messages that could negative impact the people we seek to enrich with our stories.