#102: Character Analysis #4: Neku Sakuraba (The World Ends With You) 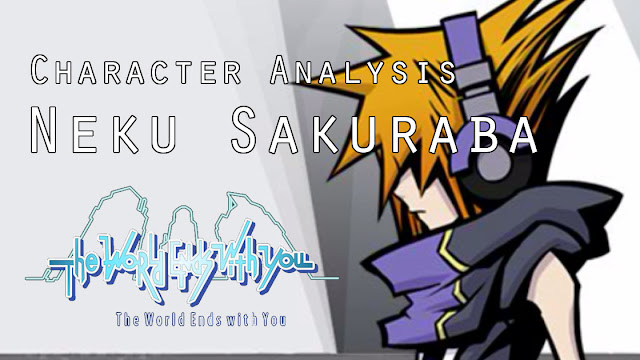 (Spoilers for The World Ends With You)
In the New Year, people are wondering what kinds of fresh, interesting games will be released. Therefore, the absolute best way for me to start 2016 is to completely disregard the desire to do new things. Instead, I went back to 2007 to play a game that I missed out on: The World Ends With You (TWEWY). Back when this game first came out, I made the decision to get a PSP instead of a Nintendo DS. That meant that up until I purchased a 3DS, I wasn't able to give it a chance.
Aside from the fact that it was a highly acclaimed RPG on the DS, I honestly didn't know too much about TWEWY going in. I'm glad that I didn't, because it gave me a chance to get to know the cast of characters on my own terms. Of particular note is the protagonist of TWEWY: Neku Sakuraba. Though not a particularly unique character on his own right, Neku serves as a great example of someone with a fully fleshed out character arc.

At the beginning of the game, Neku can best be described as an asshole. He often finds himself disgusted with other residents of Shibuya, making no effort to understand them. If you knew someone in high school that thought they was better than everyone else, and therefore no one was worth their time, then you've basically met Neku in real life. One of the first things that he notices is that no one else seems to be able to see him. Initially enjoying this turn of events, things change once he learns the reason for his newfound invisibility.
This is when he discovers that he's a player in the mysterious Reapers' Game. When somebody dies, they may give up the thing most precious to them as an entry fee to enter the game. If they win, they come back to life and reclaim their entry fee. Lose, and they surrender any claim they may have to life. As a player, he is forced to complete a mission each day for seven days. Unless at least one team completes a day's mission in the allotted time, all players will be “erased” (read: killed). As he starts to complete his first mission, he is attacked by monsters spawning out of nowhere. By partnering with another nearby player named Shiki, he is able to both fight off the monsters and prevent further attacks.
And that setup is very important for Neku's development. Until he realizes that the current circumstances make it practically impossible to avoid cooperating with others, Neku will do anything he can to avoid others entirely. He is naturally required to get over himself in order to survive, which sets him up on the path to greater character development.

Through his partnership with Shiki, Neku gradually starts to open up, eventually revealing that he can't remember anything about his life before entering the Reapers' Game. Eventually, this leads to him befriending other players aside from his chosen partner, like the pair Beat and Rhyme. Initially hostile to the two for “dragging him down with their problems”, the two partnerships grow into a strong team for completing missions. When a trap set by the Reapers, who control the game and attempt to halt all players' attempts to come back to life, kills Rhyme. Rather than leave Beat to fend for himself, as he likely would have prior to the start of game, Neku is the first to step up and hold off the enemy long enough for Beat to make an escape.
On the seventh day, once Neku and Shiki beat the Game Master, the Reaper directing the game and the missions therein, they are told that only one person is allowed to return to life. Specifically, since she performed the best, Shiki is the chosen “winner”. However, since she, Neku, and Beat survived the game, their entry fees were returned. In Neku's case, his memories were the entry fee. In order to get a chance to talk to Shiki in the real world, and spend time with his newfound friend, Neku agrees to once more participate in the Reapers' Game. Unfortunately for him, this requires a new entry fee.
This new entry fee is one of the biggest signifiers of how much Neku has changed over the course of this single week. His first fee was his memory, the thing that he valued most. As the one in charge of the game explains, Neku valued himself over anyone else. Since one is most defined by their memories and experiences, taking it away is the closest thing one can get to truly destroying someone without killing them outright. Thinking that his would just lose his memories again, Neku agree to another round. To his misfortune, after his experiences with Shiki and the others, his self and his memories are no longer than which he most values. The most valuable thing to him is the life of his partner, which is why she becomes the new entry fee.

Entering the second Reapers' Game with his memories intact and a firm goal in mind, Neku still needs a partner to fight and protect himself from monster attacks. This is when he forms a pact with the enigmatic Joshua. As a character, Joshua is a lot like Neku used to be. Often he will talk about how pointless it is for people to try to know and understand one another. Rarely does he ever talk about himself, choosing to hide his motives and agenda from everyone, including his own partner. However, he lacks the disdain Neku once had, instead demonstrating smug, self-righteous narcissism. In this way, the game highlights the change Neku has made by teaming him up with the logical extreme of his own previous personality traits.
This contrast even extends to their philosophies when playing the Reapers' Game. Neku is anxious to complete every mission given as soon as he possibly can, because he understands that both his and Shiki's lives are on the line. Meanwhile, Joshua doesn't really care about anything other than himself and his own goals. He is more than willing to let other teams get their hands dirty in order to spare himself from putting in a modicum of effort.
At least, that's how it first appears. As the week goes on, their relationship appears to change. Joshua begins to question Neku about his life and beliefs. However, this questioning isn't to prove how much better he is compared to Neku. It instead leaves an impression that Joshua is genuinely curious about the person Neku was and is. In response to the answers, Joshua pontificates about the nature of people and their relationships with others. This paves the way for his heroic sacrifice against the new Game Master for this round.
Unfortunately, despite being the only surviving contestant, Neku does not return to life on the basis that he was aiding Joshua in matters that exist outside of the Reapers' Game while playing the game. Since he still technically survived until the end, like last time, Shiki's life is returned. However, Neku must play a third, final time to be afforded a chance to return to life. As he is once again playing the game, another entry fee is extracted.

As the game starts, Neku realizes that he can't see any other players. After playing twice, he has begun to prize the partnerships and teams that have been keeping him alive. So much so, that this cooperation with other players has become the thing he values most, and the entry fee for this round. This is the same person who began the story as a misanthrope who couldn't even begin to care if the people around him lived or died. By developing friendships and working with others in a situation where he had no other choice, he has significantly changed his outlook. Watching his entry fee change over the course of 3 runs means we are able to visibly see his character progression.
This leaves him alone in a world where those without partners can be easily picked off. Fortunately for him, the gameplay and story both demand that someone comes to his aid. Through circumstances outside the scope of this discussion, Beat steps in as his companion for the third Reapers' Game. If the change in entry fees doesn't highlight how Neku evolved through the story, then the change in his relationship with Beat certainly does. The arrogant, selfish Neku from before hated Beat after just 5 minutes of conversation. This Neku, who desires a team to work with, is different. He gladly accepts the company presented to him.

It’s natural for characters to evolve as they go through whatever journey or adventure that is thrust upon them. We are far from the days where video game protagonists were little more than cyphers for the player to impact their feeling onto. However, it’s difficult sometimes to find good examples of character development with a very clearly defined through line. That’s why I want to bring attention to Neku and The World Ends With You as a whole. In growing from a misanthropic teen to someone who respects and values others, he can show how characters can slowly, gradually, and plausibly change as they react to stimuli.
Posted by newdarkcloud

Email ThisBlogThis!Share to TwitterShare to FacebookShare to Pinterest
Labels: Character Analysis, Neku Sakuraba, square enix, The World Ends With You