We're so close to truly, honestly finished out this Primer series. Just one more episode after this one.

I don't actually have a whole lot to add here in the post-script. It's almost sad that Back Cover is the last thing we talk about in this project. Not much of note happens, and the whole film comes across as milquetoast.
Posted by newdarkcloud No comments: Links to this post

And here comes the finale of 0.2

At the time we recorded this video, the trailers that were release earlier this month had not yet come out. Nor was the announcement that the game's release date would be formally revealed at E3 this year.

Sam and I also talked about the prospect of shorter, character-focused RPGs and how much we'd be willing to spend on them. I'd like to pose that question to you guys reading this as well:


Mostly, I want to know if you guys are as into that idea as Sam and I are.
Posted by newdarkcloud No comments: Links to this post 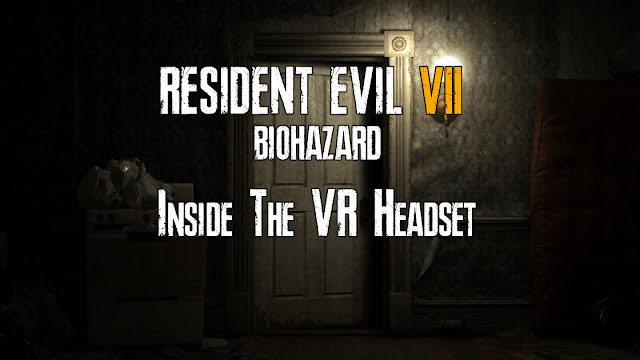 (Credit to this artist for the font)
Ever since a friend(?) asked me to join him in campaigns across Dead Space 3, Resident Evil 5, and Resident Evil 6, I have tried to broaden my horizons and open up to the horror genre. Up until then, I had avoided them like the plague because I was (for lack of a better phrasing) afraid to be scared. With mixed results, I've dived into the previous Dead Space games, Amnesia, Outlast, and a couple of others. This is why Resident Evil 7: Biohazard caught my attention last year despite not caring too much for RE6. Game critics and personal friends of mine who played it sang its praises, raising more than a few eyebrows.

But instead of rushing out to buy it, I waited... I waited because Resident Evil 7 would serve as a flagship game for the virtual reality headset Sony had created for the PS4. This wasn't just some mediocre extra mode that takes 5-10 minutes to play to stick some “VR Compatible” sticker on the box: The entire game was fully playable in VR from start to finish. Since I had already made plans to buy a PS VR headset, I decided to hold off on getting Resident Evil 7 until then. One Christmas and one playthrough later, and now I want to talk about the game, VR, and how they affected my opinions of each other.
Read more »
Posted by newdarkcloud No comments: Links to this post

Surprising everyone, we have a lot of good things to say about Kingdom Hearts in this episode.

At the end of this episode, we begin to talk about how A Fragmentary Passage is a solid, 2-4 character piece (that also shows off the technology that will be used in Kingdom Hearts 3). The fact that it is such a concise, yet mostly complete experience is a large part of what makes it so successful.

As much as I love RPGs, the commitment required to finish most of the games in that genre is a huge barrier, especially as I come into a part of my life where I generally don't have to worry about being able to afford games. Persona 5 was one of my favorite games last year, but it's not easy to recommend a 100+ hour game to somebody. And it's especially not easy to dedicate the time to it.

Though it's hardly a great example of the genre, stuff like this and Alpha Protocol shows that it is possible to make RPGs that players don't have to spent months of their life playing. Undertale also did that only a few year ago. I'd love to see more RPGs so this route, if only for the selfish reason that it slides into my schedule more effortlessly.

Posted by newdarkcloud No comments: Links to this post

Settle in, ladies and gentleman, because things are getting self-referential and existential.

It's very ironic to talk about how people watch YouTube content podcast style when the footage for this "Let's Play" got corrupted.

It feels strange to talk about YouTube and how to work around it's many problems in the wake of all the recent controversies surrounding it. With the "adpocalypse", the rise of YouTube criticism in video games, and the rest of the "YouTube culture", it's a subject that probably won't go away anytime soon.

In a way, the whole reason I came up with the queue system in the first place was that the intended way to watch content on YouTube, to follow the recommended videos and keep watching through Autoplay, just didn't fit into my schedule. I found myself annoyed at all of the great content I wanted to watch and missed out on. Thus, the queue was formed.

I know it's weird, and I doubt many other people use systems like that, but it works for me.


Posted by newdarkcloud No comments: Links to this post

Remember when I said we were done with the Kingdom Hearts and considered it closed?

It's really painful to listen to how giddy we were to do a Let's Play... knowing that the footage corrupted and we ended up doing a sudo-podcast anyway. After the incident with Watch Dogs, and the corrupted recording of our first Kingdom Hearts 1 Primer, we swore off ever re-recording something again. We also decided that we wouldn't be able to recreate the magic that was this recording.

It's also nice to not be as critical about this game as we have been to other Kingdom Hearts games. Without spoiling the upcoming episodes too much, we had a great time with this recording. We had some criticisms to be sure, but this was largely 2 hours of praise.

Lastly, kudos to Sam for taking the footage from Gamer's Little Playground and meshing it with our audio to make a final piece that is still largely cohesive. This was quite an effort on his part, and I don't want it to be overlooked.

So yeah, you asked for it, and we'll deliver.
Posted by newdarkcloud No comments: Links to this post 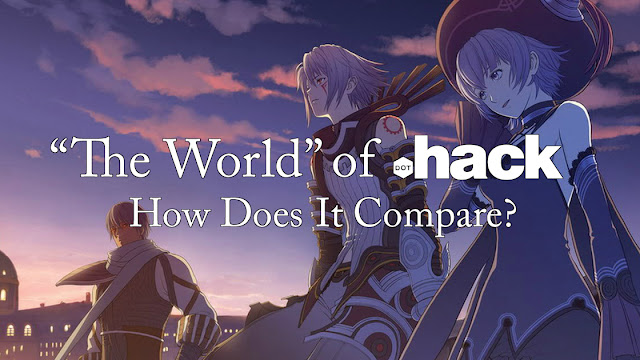 Ever since the advent of the internet, game designers have come up with a myriad of ways players can interact with and influence each other while in-game. From online shooters (both team-based and competitive), co-op campaigns, user-generated content, and even player messages ala Dark Souls, the network has become an increasingly valuable tool in the designer's kit. Certain genres, like the MMO, would be impossible without such technology. That particular genre is I what want to focus on today, but not in a way you might expect.

What I mean by that is that I want to take a look at the MMORPG, through the lens of a franchise known as .hack (read: dot hack). For those of who aren't aware, the .hack multimedia project first made its way to America in February 2003 with the animated series .hack//SIGN (read: dot hack sign), and a four part series of video games. This was later expanded on in 2006 with the .hack//GU trilogy and an accompanying anime called .hack//ROOTS, both taking place 7 years after the events of the quadrilogy. Taking place in an alternative universe where a computer virus destroyed all but one operating system and made hacking a capital offense worldwide, .hack details the adventures of various players of a fictional MMORPG called “The World”.

Most of the stories in this universe tend to focus on one character, and their circle of friends, as they investigate the mysterious circumstances wherein players are falling into a comatose state while in the middle of playing the game, with no reasonable medical explanation. While that’s the main focus, as a franchise set within an online game, it both implicitly and explicitly talks about the MMO genre and its evolution (since SIGN and the original four games take place in 2010, while GU and ROOTS take place in 2017). I want to examine these predictions and see how “correct” they were.