And now, our Improvisation Run moves from the slums to the suburbs in Whittleton Creek. Separating from the ICA to pursue his own agenda, Agent 47 is out to finish what he started as a little boy.

Now that the game's save system is back online, we can safely continue the Improvisation Run. We return to Mumbai to finish what we started.

If you want to watch runs like this as they are recorded, be sure to subscribe to my Twitch.

Now that I’ve gotten all the positivity of gaming in 2018 out of the way, it’s time to go into the games that left me unsatisfied. As per usual, just because a game is on this list doesn’t make it necessarily bad. All it means is that, either or technical issues or questionable design choices, it left a sour taste in my mouth.

That being said, the disappointments of 2018, presented in random order, are:
Read more »
Posted by newdarkcloud No comments: Links to this post

Email ThisBlogThis!Share to TwitterShare to FacebookShare to Pinterest
Labels: 2018, Disappointments, End of the Year, video games

As I like to say, whenever you see a fascist, you should do their best to kill them, unless they'd get caught. In that case, find someone who won't get caught and have them do it for you.

With that in mind, of course I would try my hand at the new Elusive Target. Codename: The Revolutionary.

The Improvisation Run continues, this time in the slums of Mumbai. And remember, if you want to watch content that this as it's record live, be sure to follow me on Twitch.

With a new setup in tow, the Improvisation Run for Hitman 2 continues. Don't forget to check out my Twitch channel if you want to see these as they are recorded live!

For those of you who are curious, I was able to fight the stream hiccups by switching from OBS to Nvidia Shadowplay, since I use one their GTX 980 graphics card. Since the software would've been designed to work with their own graphics card, I figured I'd have more success with it than with the more general use OBS. As you can see, it's a lot more stable.

Another year has past, and with it another assortment of fantastic games. It seems that as the years go by, I find it harder and harder to keep up with the near constant flood. Even if I quit my job and spent all my free time playing, I'd never be able to come close to touching all of the remarkable games that game out in 2018 alone.

That said, there is still a respectable number of games that I did play this year. And, as in previous years, this space is dedicated to the ones that stood out. This list is presented in random order, and just because a game you like doesn't make this list doesn't mean it's bad. Rather, it means it didn't evoke strong enough feelings from me to make this list, or I just didn't get around to playing it.

With that said, the highlights for 2018 are:
Read more »
Posted by newdarkcloud No comments: Links to this post

Email ThisBlogThis!Share to TwitterShare to FacebookShare to Pinterest
Labels: 2018, End of the Year, Highlights, video games

A shorter, but very impactful recording this time. We've finished up with Taipei and lightly touch on Rome, which we'll start in earnest next time.

If you want to watch content like this as it's recorded live, be sure to subscribe to my Twitch channel to be informed when we go live.

The whole issue with Ronald Sung brings up a point that the "newdarkcloud" from 5 years ago didn't understand as well as I do today, the difference between a plot hole and a character flaw. Way back when we recorded Disclosure Alert, I described Sung's desire to neither wear a bulletproof vest or call in riot police unless he is given concrete proof of the events against him as a plot hole, when that's honestly incorrect and unfair.

#121 - Hitman Takes Itself Seriously Because You're Not Supposed To 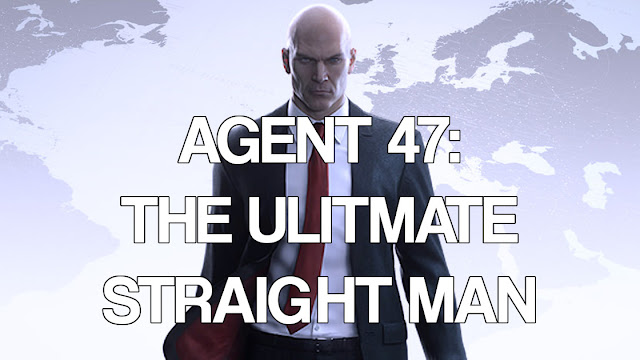 The easiest way to tell if someone has spent a lot of time playing Hitman is to ask them what their impression is of the franchise. Someone who has never played it before will usually think it's a very gritty, serious series where the main character is one of the most boring, dour people on the planet. But if a fan of the franchise was asked the same question, they would say it is one of the most hilarious IPs in the games industry, filled with the most delightfully macabre, black humor. Whether it's intentional or not, this disconnect between the stern face of Agent 47, everyone's favorite murder boy, and the comedy which he is party to, sits at the seat of what makes Hitman such a gem in the eyes of those who play it.

The genius of Hitman is that no matter how absurd the situation he's put in, no matter what is happening to those around him, Agent 47 will always look on with the same blank, completely humorless expression on his face. This visual can be amusing on it's own, in the right situation, but when all the various opportunities IO has afforded the player kick in, hilarity ensues. In other words, 47 is the ultimate straight man. There is never a moment when he loses his composure, which means that he can play off of absurd situations in a way that very few characters are capable. He's an extraordinarily boring character on his own, and that's largely the point.

And yet, if Agent 47 is the straight man, who is the funny man is this comedy duo? Normally, one might think it is his handler, Diana Burnwood. While she's certainly got her own brand of humor, and isn’t shy about making quips at her partner's, or their target's, expense, she often plays it just as straight as the assassin she feeds intel to. No, the funny man is someone else entirely: It is the player, in collaboration with the writing team at IO Interactive, that forms the second half of what would more accurately be described as Hitman's “comedy quartet”. This dynamic between the characters inside the game world, and us outside of it, is the most fundamental building block from which all of the series's best moments can be traced back to.

First off, allow me to begin my apologizing once again for the quality of the video footage in this upload. For some reason, OBS begins to falter once I start to enter areas in Hitman 2 that have large crowds. I suspect it has something to do with the toll it takes on the GPU. After this recording, I spent an hour coming up with and testing a solution to this problem, which should fix the broadcast for the next recording. Please bear with me until then.

That said, after spending nearly a year playing Hitman (2016), you didn't think I would let this new Hitman go quietly in the good night so easily, did you? Of course I was going to play it on stream. And, like with the Dishonored series, I want to get into the habit of "failure" shape my run in interesting ways that I don't usually get to see. That becomes a lot easier with a crowd keeping me honest.

Enter the Hitman 2 Improvisation Run! Today, we took on the tutorial mission, and the first real mission of the game, in Miami.

In addition, because I wanted to savor my Hitman experience a bit more, I opted to end the stream with an Escalation Contract. (Again, apologies for the video quality.)

After finally wrapping up Russia, the Closure Alert band returns to Taipei to finish what we started in the pursuit of the insidious unknown assassin attempting to murder Ronald Sung.

Don't forget that if you want to see content like this as it's recorded live, be sure to check out my Twitch at https://www.twitch.tv/newdarkcloud.

First off, props go to anaphysik here for his very involved research into the nature of Taiwanese/Chinese relations and the political quagmire that encompasses it. Up until he started talking about it off camera, I was completely unaware of the finer details behind it all. Though Obsidian gets a lot of that wrong, it colors the whole Taiwan section of the game in a way my younger self couldn't possibly appreciate.