A good way to spice up a Commander playgroup is to run a theme night to force everyone out of their comfort zone in some way. When someone in my Tuesday night crew ran the idea by the rest of us, we were all enthusiastically on board. Voting on a list of options, we unanimously chose a Ravnican Guild Wars night.

Each of us rolled a die, and from highest to lowest roll we chose which guild we would represent. The rules were that our commander had to be in the color combination of the two-color guild. Additionally, it must also be a legendary creature from one of the Ravnica blocks. (Ravnica, Return of Ravnica, and Guilds of Ravnica) 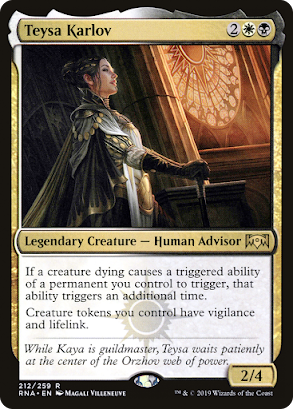 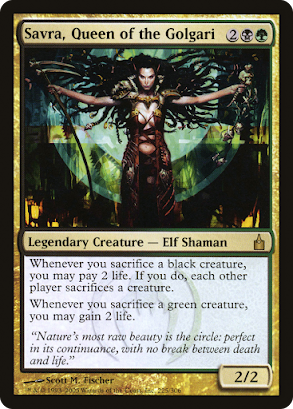 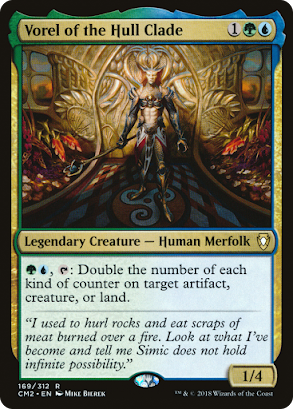 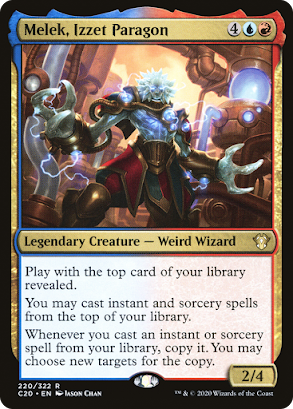 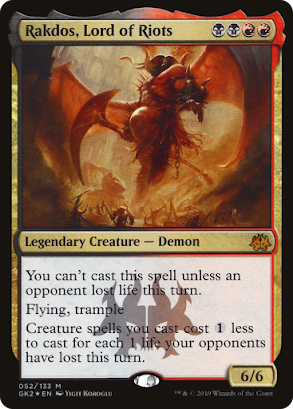 While I didn't have any land ramp early on, my land drops were consistent. As a result, I managed to curve nicely into a turn two Bitterblossom, followed by a turn three Bastion of Remembrance. This allowed me to start off with a healthy barrier that keep me relative safe from attacks compared to the other players. In particular, the Bastion remained in play for the vast majority of the game. 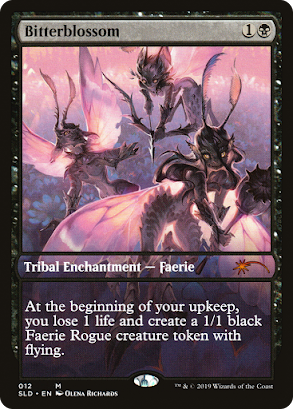 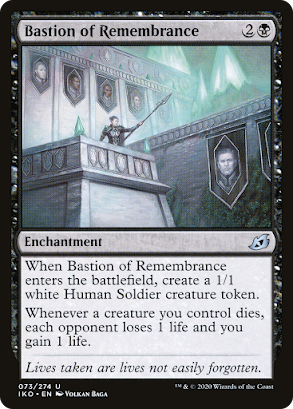 But the real big threat on the board was Teysa. Early on, her player managed to hit some early triggers with Priest of Forgotten Gods, which kept the rest of the board empty. Even once that was taken care of, they managed to maintain their lead with Bontu's and Oketra's Monument, keeping their tokens and life in large supply. 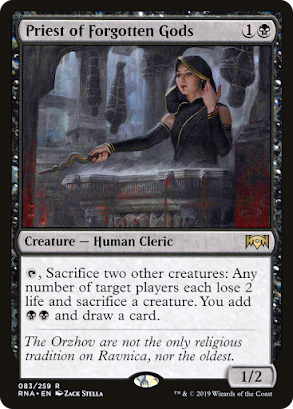 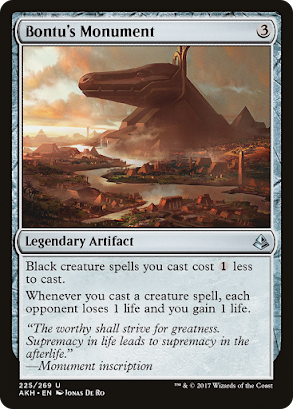 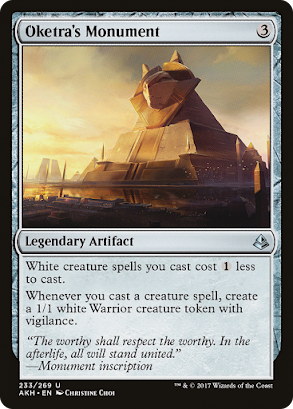 Worse than that though, once Teysa herself was on board, she started doubling many of the powerful death triggers in her arsenal. Requiem Angel was creating two spirit tokens for ever one token warrior killed, and Blood Artist was triggering twice per kill. Since I was the only one able to mount a defense in any way, those triggers were also aimed in my direction. This grew worse once Athreos, God of Passage hit the board, since Teysa doubled those triggers as well and I didn't have 6 life to pay each time one of his creatures died. 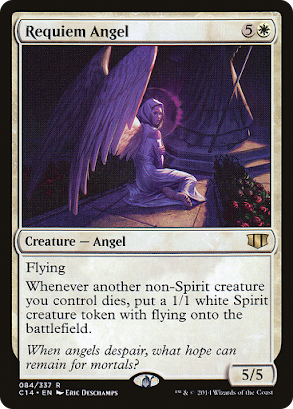 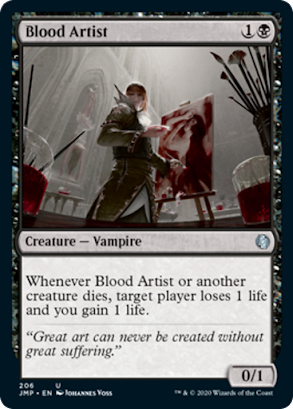 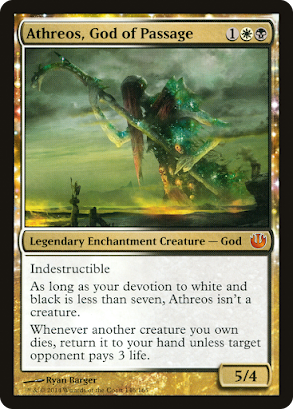 Rakdos was able to apply some pressure with a Mayhem Devil, but both of them were summarily knocked out by a crappy internet connection booting them from the game. 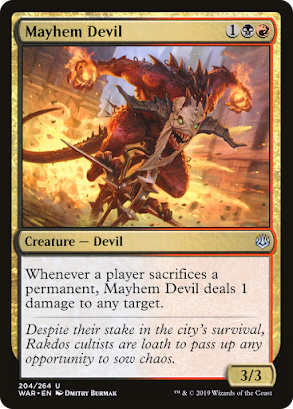 Ironically, it was Melek who saved me. Earlier, he has managed to stick a Twinning Staff. With it, he was able to cast Devil's Play, where X=11, and copy it with a Twincast to deal enough damage to Teysa's face to finish them off in a single blow. 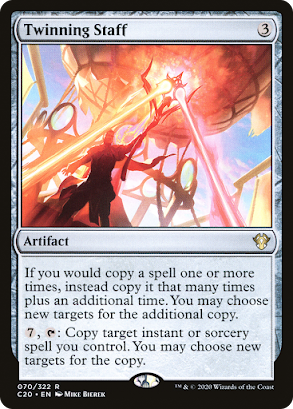 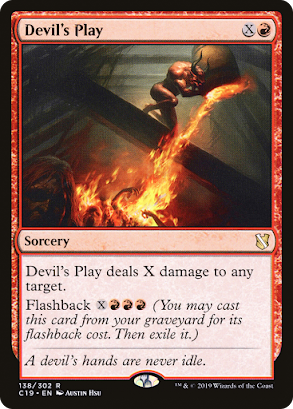 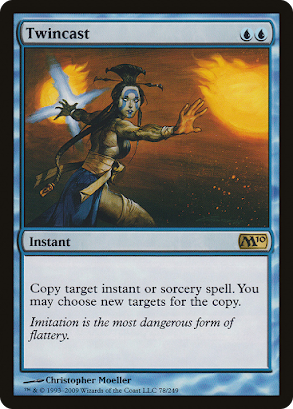 Unfortunately, that didn't leave them with enough damage to kill *me*, so I managed to win just by attacking with little army of 1/1s, using that and a combination of Bastion and Dictate of Erebos triggers to finish him off. 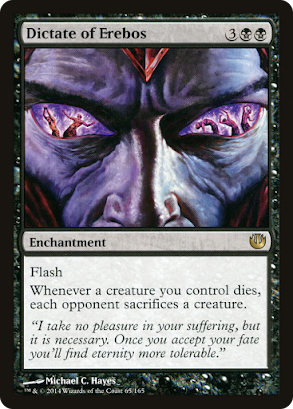 To be honest, I was surprised that I managed to win that match. And after we looked back at what everyone had, we realized the Melek could have won because he has a Primal Amulet he forgot to flip into Primal Wellspring, which he could have used to copy his Devil's Play an additional time to finish me off. 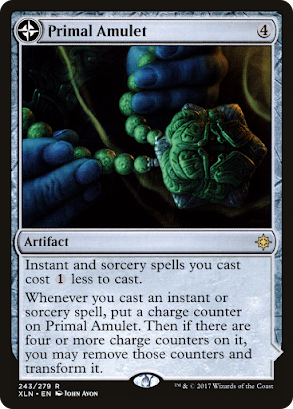 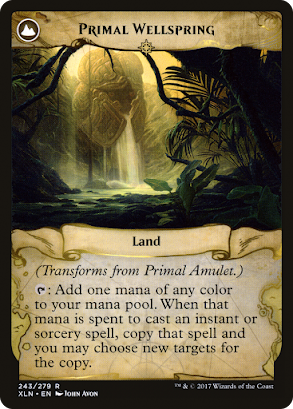 Remember to read your cards to make sure you don't forget your triggers. It could easily become the difference between victory and defeat.