Most of the commanders you'll see played against you in a match have an obvious direction or set of directions the deck could go: A Yuriko deck is probably going to swarm the table with unblockable ninjas. A Teysa Karlov deck is likely to have some token element and some aristocrats element to out-value the rest of the table. A Korvold deck is going to end your friendship with its pilot. Whatever the case, it's easy to see what it's trying to do.

Other commanders require a little more thought in how they operate. Such was the commander I opted to run at the head of my deck in this last round: Mishra, Artificer Prodigy. I didn't get to show off just what kind of tricks can be pulled with him in this game, playing one of the most fair matches I have ever played. That said, I need you to trust me when I say that despite how the text reads, there are tricks one can pull with him in EDH. Hopefully, I'll be able to show off some of those tricks in the future.

Naturally, my opponents had ploys of their own. One of them was recently enchanted by Homura, Human Ascendant, and opted to build a mono-red deck utilizing him. My fellow graveyard-loving compatriot brought Kathril, Aspect Warper to the board. And last, but not least, the Melek, Izzet Paragon player from before was continuing to break in the deck and grow more comfortable with it. 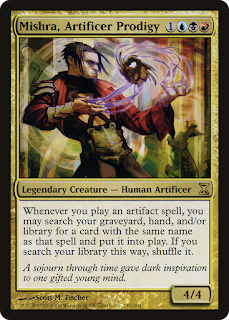 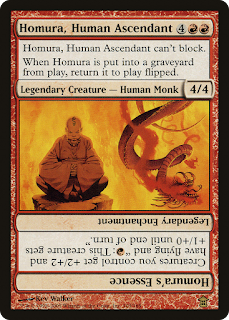 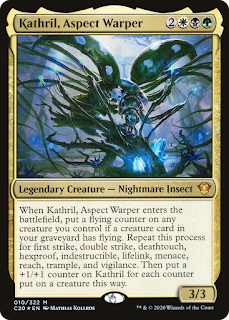 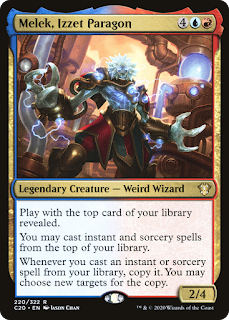 Kathril was the first to make a big splash. After casting a Buried Alive on turn three to stack with graveyard, they quickly created a graveyard filled with many powerful keywords to distribute among his forces. Though he chose to bequeath most of the other keywords to non-summoning sick creatures, the thing to note is that Kathril became a 10/10 with Flying, Trample, and Double Strike when it was summoned on turn 5. 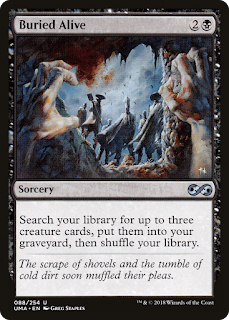 Some of us thought about scooping since it wouldn't be hard for Kathril to wipe us out, but we all chose to play on regardless. Homura, in particular, had to act quickly since he was clearly the first target. Luckily for him, he had the exact tools he needed to take charge, with some timely aid from the rest of us.

With Homura already on board, his pilot uses a High Market to sacrifice him to transform him into his enchantment half. Then, we played a Tempt with Vengeance, dumping the rest of his mana to do so. In most circumstances, giving your opponent a bunch a 3/3 hasty flying elementals is a bad idea, but this was not one of those times. It was true that none of us had the tools to deal with Kathril at the ready, so we had to settle for the next best thing... killing the player who chose to run it. 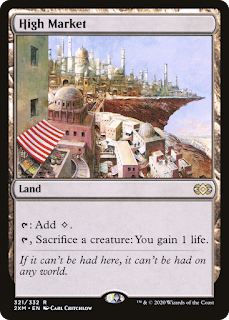 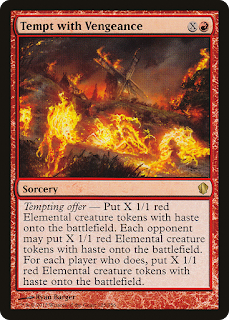 And with one problem taken care of, we were still left with an entirely different problem: That of eighteen 3/3s with flying. Fortunately for me, Melek had a plan in place, since he could order the top cards of his deck with Sensei's Diving Top. Using his commander's static ability, he casted, and copied, a Mana Geyser from the top of his deck, followed by a Fiery Confluence on top as well. I lost a few artifacts, but nothing of import. I was mostly just breathing a sigh of relief that the field of attackers had been dealt with. 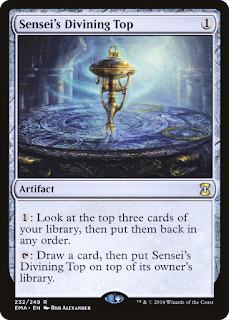 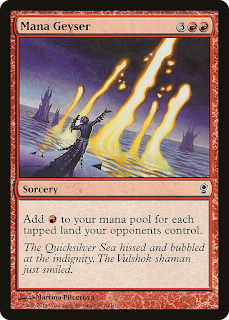 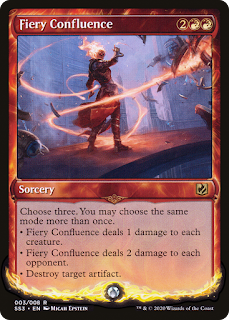 Then, Melek managed to luck into a Mystic Confluence on the top of his deck, dumping his remaining mana into it and copying it with a Twincast to draw 9 cards. With his Thought Vessel, he figured having all of those cards would be beneficial for him, and it's not a bad thought. However, he forgot that I had 6U open. As I couldn't just let him keep those cards, which meant is to time to play a Cyclonic Rift. And since I waited until he had moved to the end step to do it, and he was all tapped out, he had to make some hard choices. 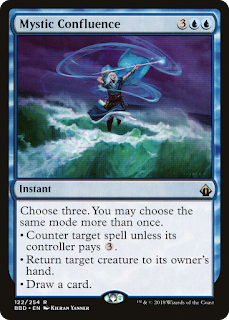 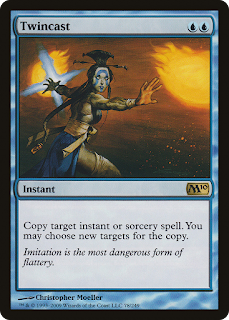 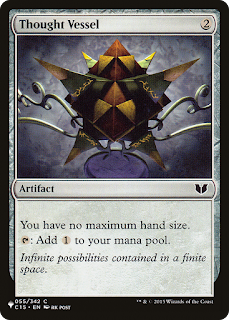 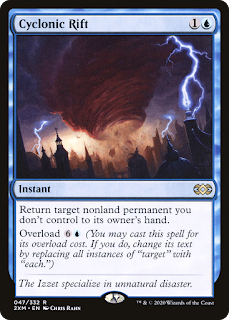 Following that, I took a turn off to play a Darksteel Forge, and in order to reestablish his board Homura put down Krenko, Mob Boss and a spell that created goblin tokens to start doubling. I couldn't allow that to persist either, especially since it wouldn't be hard to make an unstoppable army, so I used a Meteor Golem to kill Krenko. While he still managed to get 11 tokens out before I could do it, I felt very good about my choice once Purphoros, God of the Forge reared his ugly head the very next turn. 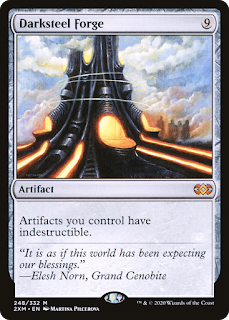 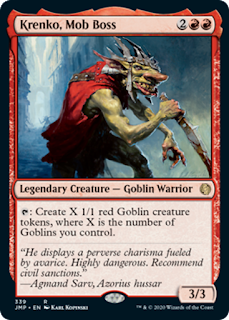 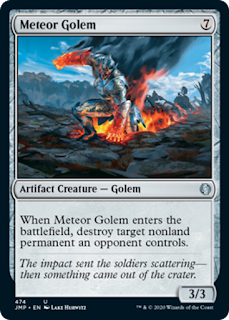 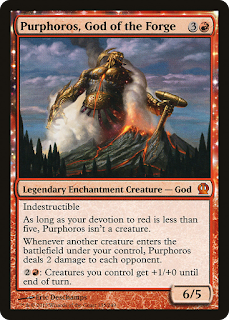 Unfortunately for Homura's pilot, both Melek and myself were growing scary in our own ways, and he didn't have enough mana to both cast and sacrifice his commander to bring his swarm online. Before he could, Melek launched a Mizzium Mortar. Most of my creatures were artifacts, and therefore indestructible, but it still dealt with the goblin horde. 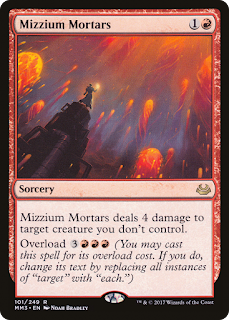 On the following turn, Melek attempted to close out the game by using Comet Storm, copied by Reverberate and Increasing Vengeance. Unfortunately, the math didn't add up. Though the 20 damage Kathril inflicted upon Homura made that lethal for him, I was able to push through since my life total was scarcely affected for most of the game. 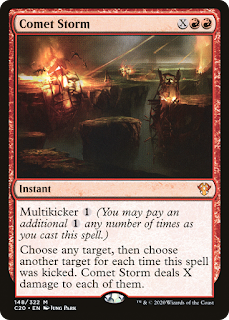 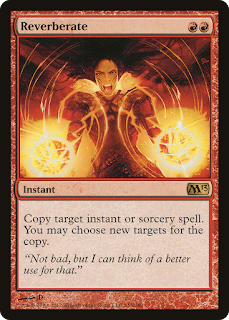 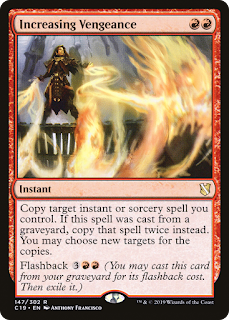 And even though he could use a Mystic Retrieval to bring back the Comet Storm, he ultimately still didn't have enough mana to deliver the killing blow, and my small force of artifact creatures was enough to swing the game back in favor to net me the win. 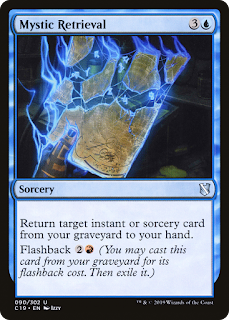 Yet again, I manage to sneak by mostly by making a few decisive waves when I needed and letting my opponents take center stage at all other times. I was never one to hog the lime light, so I'm quite happy watching everyone else turn into the "big threat" while I slip by largely unnoticed.