#121: Sekiro: Or How I Learned to Stop Worrying and Deflect 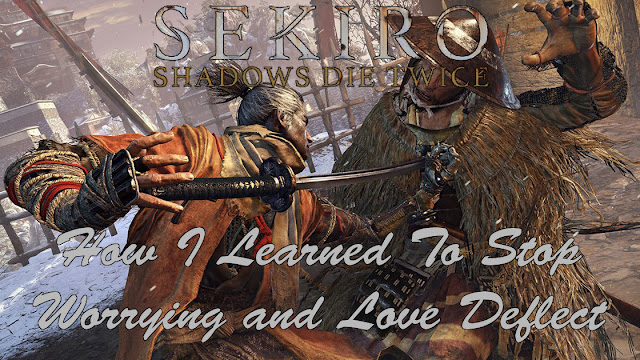 As a fan of From Software's most recent works, from Demon's Souls to Dark Souls 3, I was honor-bound to play Sekiro: Shadows Die Twice the moment it was released. Going in, I felt prepared for another exciting adventure in an environment that would do everything it could to kill me. With how easily I breezed through the third Dark Souls game, I thought that there was nothing From could do to surprise or intimidate me. They must be running out of tricks, so I would be wise to whatever they threw my way. Many of my friends thought the same way, to the game's, the developer's, and our own collective disservice.

For this reason, I completely hated the game at first, when pitted against its earliest mini-bosses, like the Chained Ogre and Juzou the Drunkard. Over and over, I found myself being cut down by these opponents, and my frustration was simmering. Worse, I didn't understand what I was doing wrong. Up until I was hit by “some bullshit” grab move that dealt over half my health's worth of damage, I'd be attempting to dodge attacks, swinging in when I felt it was safe to do so, and backing off to heal up when I was sustaining too much damage. These habits I had picked up when playing Souls games were successful up until this point. I was an expert at From Software games, so why was I getting trounced by these foes?
Looking up strategies online eventually taught me one crucial lesson: That I could sneak around these bosses and deliver a backstab by leaving the boss area and going back in to activate their search routines. While it wouldn't kill them outright, it would bypass one of their two phases, meaning I could skip half of the fight. A step in the right direction, enough to get me through the obstacles in my immediate path, but I was still missing a crucial component to my later success with the game. I was still getting through fights mostly by brute force, failing to internalize the lessons that Sekiro was trying desperately to teach me. Lessons that my puny Souls-addled brain couldn't begin to understand. That wouldn't happen until I fought my first real boss. I remember that he was riding a horse, but his name escapes me...

Right.... That guy.
Like many of the bosses before him, I found myself getting crushed again and again by attack patterns that I couldn't dodge correctly. Even when I could find an opening to swing in, Mr. Oniwa would recover and start swinging, leaving me to dodge the first hit and get swiped during the recovery frames of my evasion. As I always do, I looked up clips of other people beating the fight, so I could figure out what I was doing wrong. In one video, I discovered my big mistake, and started seeing genuine improvements in the way I played Sekiro.
In Souls games, whenever a boss enemy performs a big swing that causes tremors when it hits the ground, the implicit contract is that it cannot be blocked. If the player does not avoid this attack, they will assuredly take damage. Watching Gyoubu's spear impact the ground in that same way fooled me into thinking that was true in Sekiro as well. I believed that if I could not dodge those attacks, I would sustain damage. In a game where a single attack can easily eat through a third, or even two-thirds of one's health, that was a dangerous prospect.
Imagine my surprise when I saw others boldly hold their sword in a defensive stance and just block and deflect these awesome, earth-shattering blows with ease. Masters of the blade going up against a foe far stronger than they were, on the razor's edge between life and death, maintaining perfect posture as the force of Gyoubu's attacks glances harmlessly off of their weapon. When the horseman attempts to make space between them to charge in, these warriors would using their grappling hook to close the distance and punish this brute for his cowardice.

Just like that, I understood what Sekiro wanted me to do, and who it wanted me to become. In From Software's previous work, the player was an adventurer going up against overwhelming odds. Giant enemies, hordes of undead, and a world filled to the brim with perilous adversity were the name of the day. If one survived, it was by the skin of their teeth, just barely outwitting and outmaneuvering these powerful opponents. In other words, oppression was the name of the game. One had to be defensive in their thinking just to stay alive. Fearlessness would be punished by a swift execution.
While opponents are no less tough in Sekiro, a whole new paradigm is required to be successful. Gone is the adventurer who secrets away to heal, biding their time as they gradually chip away at their larger, more ominous foes. In their place is the titular one-armed Wolf: Ruthless assassin, slayer of man and beast. An opportunist who never relents, the shinobi presses offense such that their opponent, no matter how fearsome, cannot breathe for even a moment. If they respond in kind, the ninja must deflect those blows in the hopes of breaking their stance. After all, no matter how strong the enemy, a few well placed slashes and thrusts are all one needs to defeat them.
Taking this new mentality in, the difference was night and day. Within two tries, I was able to knock Mr. Oniwa off his literal high-horse and deliver that one, fatal strike. A boss that had slain me countless times before now lied dead at my blood-stained hand. And while I would never say that the game became easy, learning to play it the way it was intended to be played, rather that try to force my own approach, alleviated a lot of strain that was building up in the early game. Some habits died harder than others (it took me far too long to internalize that I could jump to dodge sweep attacks), but understanding what was going wrong and being able to correct it gave me ample incentive to keep going.
If you're reading this and struggling in Sekiro, take that lesson to heart. Let the game guide you towards mastering the systems at play. Treating it as another Souls game will simply add to your death count. I almost quit because of how frustrating it was, and I'm glad I didn't. Sekiro deserves more than to be treated like that. It's not going to be a game for everyone, but it's so unique compared to much of what's on the market today that I can't help but fall in love it. Never before have I felt like such a skilled fighter and assassin, and the game guided me into that.